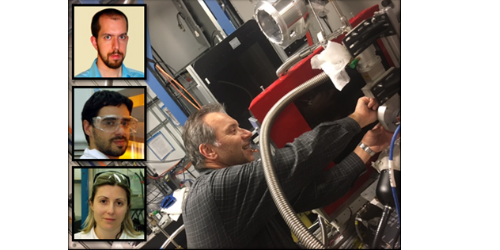 A new research study on minute crystals, many thousand times smaller than a particle of dust, find that the right kind of imperfections adjust their electronic properties to favorably convert electromagnetic energy into heat, an important attribute for potential use in smart materials for energy, health, and sensors.

To successfully conduct this critical research, Dr Alexandros Lappas, Research Director at the Institute of Electronic Structure and Laser (IESL) of FORTH, has coordinated an inter-disciplinary collaboration that has brought together theory and modelling from INN-Demokritos (Greece), magnetic characterizations from CNR-SPIN & UNINA (Italy), scientific research with photons from CMPMSD-BNL (USA), and nanoscale materials analysis from LCN (UK), with the purpose to explore the relation of structural defects on the size and shape of iron-oxide, colloidal nanoscale crystals and determine how these couple to magnetic properties relevant to nanobiotechnology; the outcomes were recently reported in the premier scientific journal Physical Review X.

Along these lines and in particular in the battle to fight cancer, Researchers are actively developing sophisticated strategies to destroy tumors by raising their temperature. In one such approach, nanoscale crystals (nanocrystals) injected into the cancerous tissue and heated by external stimuli (e.g. a magnetic field) offer a new, minimally invasive therapeutic solution that can also help to reduce toxicity of anticancer treatments. The team at IESL-FORTH came up with the novel concept that the required physical properties can arise from the breaking of symmetries, such as by introducing vacancies (i.e. empty atomic sites), rather than by having crystals with perfectly ordered atomic arrangements. The functionality of such a system’s state is reflected in improved performance when magnetically-mediated heating (local temperature increase beyond physiological limits, known as “hyperthermia”) is pursued with nanoscale crystalline particles. The idea endorses “Pierre Curie’s Principle” (1894), reasoning on the broader role of symmetry breaking in triggering a phenomenon and creating useful physical properties (c.f. from piezoelectricity and quantum field theory to protein folding). 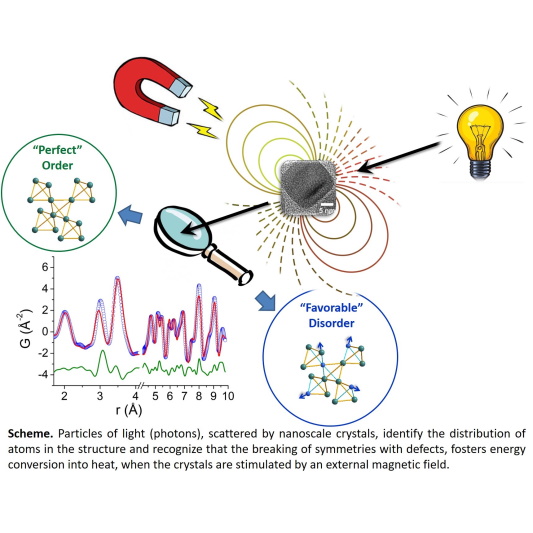 Key to uncovering the present findings was the use of ultra-bright, high-energy photons offered at a synchrotron facility (NSLS-II, BNL, USA). Being hundreds of million times brighter than the conventional medical X-ray imaging sources, such light beams when interacting with a sample, operate as a superb magnifying lens that records in an unprecedented way the arrangement of atoms, and uniquely projects any slight defect and distortion in the crystal system (Scheme). “The emerging local symmetry breaking due to defects, changes the nanocrystal’s magnetic anisotropy in the favorable direction. The vacancies act as pinning centers that foster the competition amongst the elementary magnets (spins) out of which they are composed, in effect impeding the coherent reversal and easy relaxation of the spins. This allows a remarkable ten-fold rise of the nanomaterial’s thermoresponsive performance as compared to that obtained by defect-free entities. The release of energy from the spins, may resemble the situation where friction generates heat when an object moves through a viscus medium”, explains Alexandros Lappas, group leader at the Quantum Materials and Magnetism Lab of IESL-FORTH.

The investigation suggests the broader implications of atomic-scale defect control as a design parameter that favors anisotropic properties for optimized nanomaterials, with simultaneous diagnostic and therapeutic functionalities (cf. magnetic image-guided thermoresponsive cellular processes, sought in the field of theranostics).