PROF. DIMITRIS VLASSOPOULOS TO RECEIVE THE BINGHAM MEDAL FOR 2019 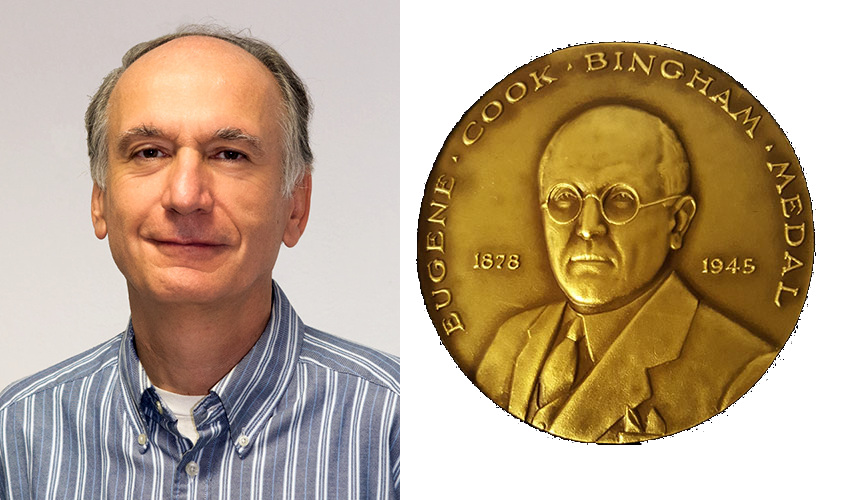 Dimitris Vlassopoulos Professor of the Department of Materials Science and Technology of the University of Crete and Affiliated Faculty Members of the Institute of Electronic Structure and Laser (IESL) of the Foundation for Research and Technology – Hellas (FORTH), has been elected to receive the Bingham Medal of the Society of Rheology of the USA for 2019.

The Bingham Medal was established in honor of Eugene C. Bingham to be awarded to an individual who has made outstanding contributions to the field of rheology. The Bingham Medal is awarded to Prof. Vlassopoulos “for outstanding achievements in the field of experimental soft matter rheology; including revolutionary discoveries in the key areas of polymer blends, branched and ring polymers, and soft colloids; and for the development of powerful rheometric and rheo-optical tools”. The Medal will be presented at the 91st Society of Rheology Annual Meeting to be held October 20-24, 2019 in Raleigh, North Carolina.

Prof. Vlassopoulos holds a Diploma in Chemical Engineering from the National Technical University of Athens (1983) and a Ph.D. in Chemical Engineering from Princeton University (1990). His research interests are in the areas of Molecular Rheology and rheo-physics in the bulk and at liquid interfaces, Branched, ring and associating polymeric systems and networks, Soft colloids and mixtures and Nonlinear rheological measurements. He had been a Researcher at the Research Center of Mobil S.A. in the USA (1990-1992) and a Principal Researcher at IESL (1992-2002). He was awarded the Weissenberg Award of the European Society of Rheology in 2015 and was elected Fellow of the Society of Rheology in 2018. He has been the European Editor of Rheologica Acta (2006-2011) whereas he serves as an Associate Editor of Soft Matter (2015-now).

The Director of IESL, Professor Spiros H. Anastasiadis, said: “The Bingham Medal of the Society of Rheology of the USA is the highest honor for a researcher in the field of rheology. The award to Prof. Vlassopoulos is one more confirmation of the high impact and recognition of the research done at IESL-FORTH and the University of Crete within Europe and the World. Such awards are especially important now when science and innovation, which go along with excellence, can and should be critical for the development of the Country. IESL is particularly proud of Prof. Vlassopoulos and the successes of himself and his collaborators”.