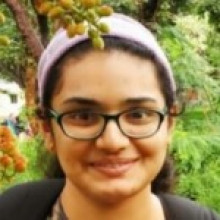 Vidhu did her Bachelor of Science (Physics, Mathematics, Computer Science – Triple Major) at Bangalore University (Wiki), from which she graduated second of her class (Gold Medalist).

During the final year of her Bachelor’s Program, she was selected for the prestigious Indian Academy of Science (IASc) – Summer Research Fellowship Program (SRFP) – 2017 at the Quantum Materials and Devices Group (formerly known as the Low-Temperature Nano-Electronics Group), Department of Physics, Indian Institute of Science, Bangalore, under Prof Arindam Ghosh.

After working as a Project Trainee in the same group, she continued with her Master of Science (Physics) at Bangalore University and graduated top of her class (Gold Medalist). Her master’s project was on Quantum Computation, Estimating Pi using Quantum Phase Estimation Algorithm, which she runs on the public access quantum computer of IBM (Qiskit).

Following her masters, she joined as a Project Assistant / Junior Research Fellow (JRF) at the Quantum Optics and Quantum Information Processing Group, Department of Instrumentation and Applied Physics, Indian Institute of Science, Bangalore.

At the moment she is awaiting her visa which has been delayed due to COVID restrictions.