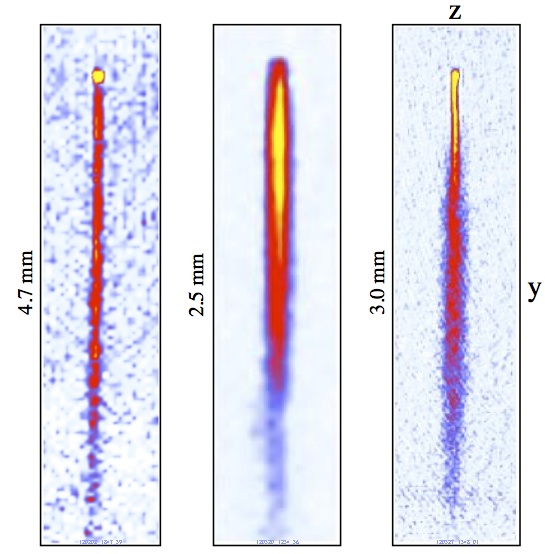 "An ultra-bright atom laser" [New Journal of Physics 16, 033036 (2014)], was selected from Editors of New Journal of Physics as one of the three most important publications which were included in the exclusive collection "Highlights of 2014" of journal in the field of Atomic, molecular and optical Physics.

Abstract:
We present a novel, ultra-bright atom-laser and ultra-cold thermal atom beam. Using rf-radiation we strongly couple the magnetic hyperfine levels of 87Rb atoms in a trapped Bose-Einstein condensate. At low rf-frequencies the resulting trap opens up just below the condensate and a well collimated, extremely bright atom laser emerges from just below the condensate. As opposed to traditional atom lasers based on weak coupling, this technique allows us to outcouple atoms at an arbitrarily large rate. We demonstrate an increase in flux per atom in the BEC by a factor of sixteen compared to the brightest quasi-continuous atom laser. Furthermore, we produce by two orders of magnitude the coldest thermal atom beam to date (200 nK).

Supplementary Material:
- A grayscale version of Fig. 1. (link)
- The slices and fits used in the analysis of Fig.1c, i.e.the atom beam containing both a thermal beam and an atom laser beam. (link)
- A video of the numeric simulation of an atom laser. (link)